Starbucks! (Country Version) by Bobby Bones & The Raging Idiots (featuring Kelsea Ballerini) is a country song from the album The Critics Give It 5 Stars and was released in the spring of 2016.

The official music video for Starbucks! (Country Version) premiered on YouTube at the beginning of March 2016. Listen to Bobby Bones & The Raging Idiots' song featuring Kelsea Ballerini above. 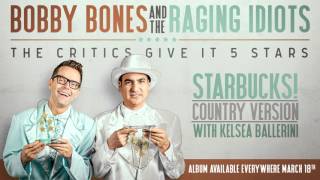