Small Town Throwdown by Brantley Gilbert (featuring Justin Moore & Thomas Rhett) is a country song from the album Just as I Am. The single reached the Billboard Top 100 chart.

The official music video for Small Town Throwdown premiered on YouTube at the beginning of August 2014. Listen to Brantley Gilbert's song featuring Justin Moore and Thomas Rhett above. 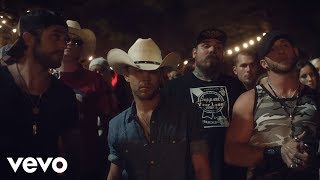