Bring It On by Darius Rucker is a new country song from the album When Was the Last Time and was released in the fall of 2017.

The official music video for Bring It On premiered on YouTube at the beginning of October 2017. Listen to Darius Rucker's song above.

Bring It On Lyrics

Darius Rucker's Bring It On lyrics were written by Ross Copperman, Dallas Davidson and Ashley Gorley. 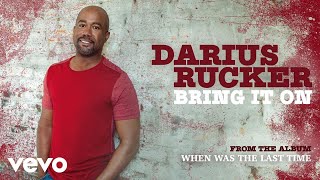