The official music video for Dear Hate premiered on YouTube at the beginning of October 2017. Listen to Maren Morris' song featuring Vince Gill above.

Maren Morris' Dear Hate lyrics were written by Maren Morris, Tom Douglas and David Hodges. The single was released for the victims of the Las Vegas shooting. 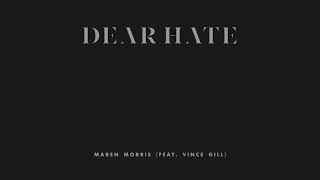